IOHK has presented the new version of the Plutus Playground, the platform for that will provide the foundations of the Goguen era and smart contracts on Cardano. In conjunction with the components introduced with the first hard fork combinator event in December and those to be introduced in February with “Mary”, Plutus will be the backbone of the DeFi ecosystem of Cardano.

IOHK announced that they have “refreshed and updated” the Plutus Playground and invited developers to write and test smart contracts and decentralized applications on Cardano. Based on the programming language Haskell, Plutus uses the Plutus Core smart contract language to integrate the functions of token locking and native assets to enable:

(…) developers to write high-assurance applications that interact with Cardano (…). Using Haskell for smart contract deployment ensures that contracts are programmed to do exactly what they are expected to and can be tested for accuracy before implementation.

Stress test for Cardano’s smart contracts in the preparation phase

Among the changes that have been made to Plutus Playground is an update to the user interface. Without the need to download additional applications, the Plutus Playground operates through a web browser and is divided into the following sections: editing, simulation, transactions. 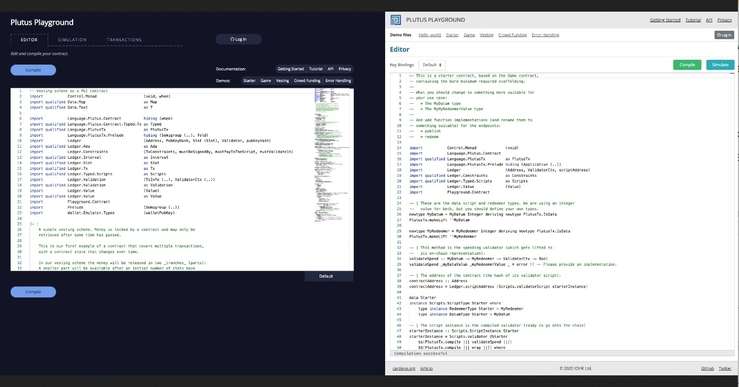 In addition, the new version includes a keyboard configuration, so that developers can choose between Vim, Emacs or keep the default. Developers can also link their GitHub accounts to the platform and save their progress.

Moreover, the Plutus Playground offers an archive of “popular” smart contracts that have already been written. With the simulator, it is possible to see how these contracts on the archive or the contracts written by the developer work. That way, they will be able to make modifications to the contracts, to test the way they interact with a wallet or external element, and run different scenarios to evaluate their results in the blockchain.

Use cases that can be addressed with the smart contracts and decentralized applications on Cardano include supply chains, identity reconciliation, property registration, peer-to-peer payments, securing medical records and creating financial systems. Accordingly, Plutus Playground is aimed at businesses, governments, entrepreneurs and communities.

After deploying the native multi-asset components with the second Hard Fork Combinator (HFC) event called “Mary“, IOHK will move forward to implement a third HFC to fully roll out Goguen. Before that, however, a stress test for Plutus must be conducted.

IOHK CEO Charles Hoskinson stressed that the stress test will be crucial. Once it is completed and the results are in, IOHK will introduce the final Hard Fork Combinator event, which will include all the components for Cardano’s entry into the DeFi sector. Therefore, current developer participation is key for this phase of development.

With Product You Purchase

Be the first to read future updates for Cardano.

Are You A Single SPO?DripDropz To The Rescue!!

With Product You Purchase

Please consider supporting us by disabling your ad blocker